The Ripple Affair Series is a romance/fantasy series by author Erin Cruey.  Check here for the series’ latest release updates and information!

Edward Engel is many things.

A prince to inherit a throne. A man betrothed to the beautiful Lady Antoinette. A dashing warrior with no equal in skill.

And a man with enough secrets to make his entire world crumble.

His life remains uninterrupted until he meets Malina, the daughter of a neighboring king, who quickly sets her gazes upon the prince and his heavy crown. After a drunken night of passion between them, Edward hopes his meeting with Malina will become just another secret to bury, never to be known to anyone but him and the princess.

But it takes two to keep a secret, and Malina is not one to let a man get away so easily.

Will Edward be able to keep his secrets intact, or will his affair with Malina create a ripple effect that goes beyond the bedchamber?

Reign of Change is the second book in The Ripple Affair series.  It is available on Amazon, Kindle, and Createspace. 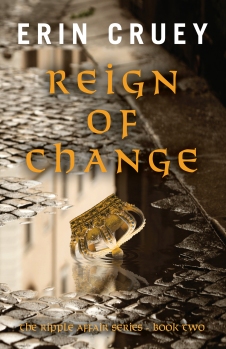 Edward Engel thought his many secrets were hidden, but after marrying Malina, his life is more exposed than ever.

A pregnant mistress. An international scandal. Family division and a throne’s future uncertain. Edward thought it was only his life that would be changed because of his affair with Malina, but nothing can be further from the truth.

His former fiancée returns home brokenhearted, unsure of how to face the days ahead. His cousin finds hope in picking up the pieces, knowing the woman he loved may no longer be lost. His parents take sides as a play for power ensues, forcing them to choose between duty and family.

Change is coming to the land of Audlin, and Malina takes pleasure in knowing she controls it all.

The ripple effect of Edward’s affair is starting, and the future has never been more unclear.

When Dreams Break is the third book in The Ripple Affair series.  It is available on Amazon, Kindle, and Createspace. 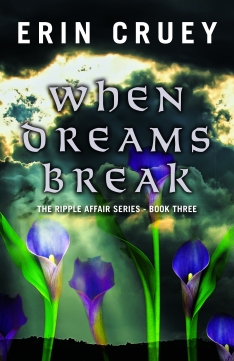 Near a year after Edward’s betrayal, his former fiancée, Antoinette, is engaged to her childhood friend, Emmerich.  Hoping to finally find happiness by escaping a marriage to conniving Prince Arnold, the two plan a secret elopement, knowing their union will meet with disapproval…and scandal…if caught.

Meanwhile, Edward begins his new life as the king of Audlin.  Different from his father, Edward finds himself needing to be clever to counteract his wife’s growing popularity with the nobility, but will his actions secure his reign or play into Malina’s plans for his demise?

Lies.  Deceit.  Acceptance.  Betrayal.  Many seek hope after so much loss, but will the actions of the past determine the fate of the future?  Or can love and loyalty keep their dreams from breaking?

Heart of Deceit is the fourth book in The Ripple Affair series.  It is available on Amazon, Kindle, and Createspace.

After a disastrous evening in Reigal, Edward Engel is faced with a crisis.  After discovering his cousin, Emmerich, has run away to Edeland to pursue the newlywed Princess Antoinette, he also learns that her sister, Bernie, has been mysteriously left behind while her family returns home.  Afraid Emmerich’s recklessness will cost him his life and threaten the country with war, Edward sends his trusted knight, Sir Peterson, to escort Princess Bernie home and bring Emmerich back to safety.

But things do not always go according to plan, and even the best of intentions can have the most unexpected consequences.

Loyalty is tested.  Sacrifices are made.  Love blooms like the flowers of spring.  And yet deceit reigns as a new power begins to emerge that may threaten the very existence of Edward and everything he holds dear.

Coming Soon in Fall 2019!  Heir of Vengeance is the fifth book in The Ripple Affair series. “I am called Malum of the Velori,” he replied. “But I was born Stephen Engel.”

As Edward recovers from an assassin’s attack, Stephen begins his plan of vengeance by revealing himself to the palace. Through lies and treachery, he starts to turn friend and family against brother, making Edward wonder who he can trust to stay loyal as a battle for the throne begins.

Meanwhile, after her sister is rescued, Antoinette sets out to return to Edeland as Emmerich is brought back to Audlin. The strain of the secret marriage is starting to take its toll, but after mysterious symptoms appear and she becomes consistently ill, she learns that her secret might not have a choice but to come out.

Truth. Vengeance. Fear. With Stephen’s return, Audlin teeters on the brink of war. Will Edward be able to contain the fires about to spread, or will the original heir rise to take back his throne?

“Heir of Vengeance” – Book 5 of “The Ripple Affair” Series